Hire a car at Alicante airport to make sure your Spanish Holiday starts right. We have you covered.  We make the comparisons, so you don’t need to.  This ensures you get both the cheapest car hire available but the best value for money.

From our wide variety of rental car models, we have a car that is perfect for your holiday. Whether you want to hire a compact or economy car or prefer the full-sized sedan or SUV, we have the car you need.  Our hire cars are waiting to get you moving as soon as you land.  In short, there are no mini busses and no waiting.

Facts about hiring a car from Alicante airport

With normal opening hours between 7 am and midnight, finding your hire car is usually just a matter of exiting the baggage claim area. Once you are out, head to your right past a few restaurants following the signs on the floor. The car hire service desks will be to the right and left of you.

Once you have found your desk and checked-in, head to the car park across from the terminal. This can be reached from either the departures level walkways or by simply crossing the road – it’s probably best to take the indoor route, airport traffic can be busy. The lift buttons in the car park have each car hire brand clearly marked beside the floor they are located on. Get out on the appropriate floor, and your car will be waiting for you.

Dropping off your rental car

To return your car upon departure, you need to drive past the old terminal building following the signs marked Rent a Car. Take the centre downward ramp to the car park. Be sure to avoid the bus and taxi only exit to your right.

Stay left following the Rental Car signs and avoid pulling into the public car park! Toward the end, you should see the entrance for the Rent a Car Drop off area. You will need to pass a barrier by clicking a red button. Once you click the button, your number plates are recorded, and the barrier lifts.

At this point, it is up to you to return the car to the correct floor. There are clear signs showing the floor location of each of the Car Rental Companies. Each company’s process varies but go to the correct floor, find the office and make sure you hand your keys over to a company representative. 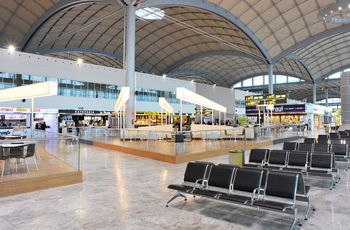 The airport opened in 1967, replacing a much older facility that was first built in 1936. It has undergone substantial upgrades over the years. In the 1980s the runway was extended to 3 Km long, and in 2011, the new 2 terminal facility was opened.

Alicante-Elche has beat its passenger numbers annually since 2013 and served over 15 million travellers in 2019. It is one of the 50 busiest airports in Europe.  This is because Alicante Airport provides services to over 30 airlines with either year-round flights or seasonal charters.

Airlines that fly in and out of Alicante Airport include Atlantic Airways, British Airways, easyJet, Eurowings, Finnair, KLM, and Ryanair, though these are just a selection of the total carriers.

Alicante Airport serves international routes to most major cities in Europe, and the UK and flights are usually year-round. Domestic flights have similar year-round availability.

Alicante Airport has had a single, integrated passenger terminal. Most people refer to it as the New Terminal or NAT for short. NAT is simply an abbreviation of the Spanish Nueva Área Terminal.

When it opened in 2011, the NAT replaced the original terminals. Nevertheless T1 and T2, still stand unused on the airport grounds.

The NAT provides service to both international and domestic flights, but the majority of travellers arriving at Alicante Airport are International passengers. While flights come from all over Europe, the UK, Germany, Netherlands and Norway make up the majority.

As you might expect, Alicante airport has all the conveniences you would expect to find in a modern Spanish Airport. Everything is located in the NAT. From Duty-free shopping to bars, restaurants and snacks, it’s all under one roof. For the business traveller, one entire level is for conference rooms and the VIP lounges.

The airport offers Free Wi-Fi is offered throughout the terminal.  ATMs,  Banking and money exchange services are also plentiful whether you are arriving or departing.

Medical assistance is close to hand should you need it.  Because it is a relatively recent facility, special care was taken Alicante Airport’s design to assist passengers with special needs.

Lost & found and lost luggage facilities are also within the New Terminal.