If you want an airport pick up to help you get to the Caleta de Fuste quickly, we have what you need. Search to find the unlimited mileage or additional driver policy you are looking for. Book early with crhirespain.net.

We can help you with an effortless car hire experience in Fuerteventura. 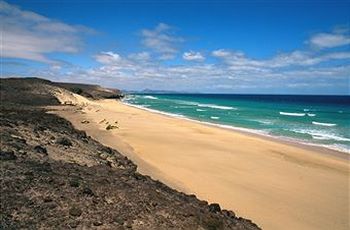 Yet another of the sun-kissed islands on the Canary Archipelago, Fuerteventura is one of the largest of the Canary Islands. It is second only to Tenerife. It is also the third most populous after Tenerife and Ibiza with over 865,000 permanent inhabitants. As you can imagine, during the tourist season, those numbers increase radically.

The beaches are the most obvious reason to visit Fuerteventura — crystal turquoise waters and snow-white sands ring the whole island paradise. While they all share common elements, there is a beach here for everyone.

Get on the water in Fuerteventura

Explore the beaches of Jandia in the south or the virginal Playa de Cofete, a 12 kilometre stretch of pure sands and wild natural terrain. Don’t forget La Concha shaped like a half-moon and sheltered by a lava reef. The sand isn’t the only draw in Fuerteventura, under the water there are also the abundant rare species that make these waters alive.

Fuerteventura is a surfers and windsurfers paradise thanks to strong ocean winds and seasonal high waves. If this is a little too active for you, world-class snorkelling and diving are also right off the north coast.

Surfing and windsurfing are at their best on the western and coasts. Try around the Corralejo Reserve and the Playa de Sotavento.

If it is a more sedate pace you are looking for Rural tourism is becoming increasingly popular. Head to one of the lower populated pockets of natural beauty found throughout the centre of the island. Whether you want to stay in a traditional old Canarian house or spend the day hiking alone, you won’t be disappointed.

Most of the nightlife in Fuerteventura takes place in Corralejo, the tourist town toward the north of the island. The town is remarkably well-stocked for bars and restaurants for its size. In Corralejo, you will find what you are looking for.

What to see in Fuerteventura with a hire car

So, you have got your hire car in Fuerteventura, and now it is time to see the island. Here are a few things you should check out if you want to get away from the crowds and explore a little:

The Playa de Cofete is at the most southern point of Fuerteventura. It is also part of the Jandía Natural Park. The Jandia peninsula, over 200 square kilometres, is joined to the rest of the island by the La Pared isthmus. The isthmus is nearly 6m long.

This gorgeous beach is on the western part of the peninsula, on what the local residents call the parte de barlovento or windward side. If you are driving a hire car, park it and arrange a ride to the beach. This area can only be reached in a four-wheel-drive — you will void your insurance if you try to drive it in your hire car.

Even though you can’t drive the last 12km yourself, it will be worth it.

Playa de Cofete is a spacious gold sand beach. The mountain are a dramatic background at the southern tip of the island. The landscape is surreal and primal. It has also been the location of some otherworldly film shoots.

Be prepared!  Bring everything you need for a long day because this is a wild, natural place. The town of Cofete has restaurants where you can get a drink and a snack, but it is quiet except for the busiest weekend in the summer.

If you swim, also remember the currents are strong and only venture out into the water if you are sure you know what you are doing. Cofete is an excellent surfing beach, and that means rips and undertows.

For an adventure on the water, head north in your hire car to check out the Isla de Lobos, the Island of Wolves. Once home to a population of Lobos Marinos, or sea wolves, an active effort is being made to reintroduce the species.

Even if the wolves aren’t there, there is plenty of marine life, rare birds and also 130 species of plants unique to the island remain.

The island sits off the northeastern coast of Fuerteventura. It is a rocky nature reserve rich in wildlife and only 2.2 km squared.  The best way to visit the island is by paddleboard or kayak. Once you have secured your vessel and seen Isla de Lobos, you can take a side trip to Playa de la Concha. This is a great way to spot one of the local population of hammerhead sharks.

Bring footwear in a dry bag so you can break up the paddling with a hike up the Caldera de la Montana. While it is not the largest peak in the Canaries, Isla de Lobos’ Caldera de la Montana is the island’s highest point at 127 m (417 ft). It also provides excellent views of the island, the mainland and out to sea.

Getting onto the water is a great way to get some exercise and also see the island.  After a short paddle to the north, you can see the Lobos Lighthouse, originally fuelled by olive oil.

Once you are done paddling head for lunch at one of Isla de Lobos charming restaurants and put the local olive oil to a better use.

If al the paddling hiking and rugged adventure of the Isla de Lobos and Playa de Cofete have you feeling like a more relaxed excursion hop in the hire car for Puerto del Rosario. It will be a welcome change.

Puerto Del Rosario is an ordinary town with a twist — It is also a living outdoor art gallery. In 2001 an initiative began to bring art to the city. With over 100 sculptures placed around the town, there is a new wonder around every corner.

There are also some 400 murals many Catholic-infused, bright and colourful with gold and silver leaf. For a more in-depth look at Catholic art, there is the Museum of Sacred Art near the Iglesia Santa Maria.

Take the time out to stroll from piece to piece through the city. When you are done admiring the historical and marine-themed art, there is always somewhere nearby to stop for a drink or a local snack.

Is it worthwhile hiring a car Fuerteventura?

Yes, it is definitely worth hiring a car on your holiday in Fuerteventura. That is if you also plan your trip well and book ahead of time through us

By booking early, you can probably rent a car for a week for the cost of your airport transfers and a couple of short taxi rides.

If I hire a car in Fuerteventura can I take it to another island?

Unfortunately, most car hire suppliers will not let you take your hire car from one island to another.

If you plan on visiting more than one island on your trip, please make multiple bookings. Search to compare rates and book early to ensure your hire car is waiting at the lowest possible price.

What do I need to hire a car in Fuerteventura?

To rent a car in Fuerteventura, you must be over 21 years old (23 for some suppliers, check the policy online). You need to have had a driving licence for more than three years. A valid credit or a debit card in your name with sufficient funds must be shown at the pickup point.

Please be aware that for some drivers under 25 years of age, additional insurance cover may be required. Check our rental comparison search to confirm a policy suits you before you book your car hire.

What is the minimum car hire in Fuerteventura?

The minimum car rental period is one day. Be aware you will secure a much lower daily rate for a more extended period.

Even if you are only renting for a single day, you can still save considerably by booking ahead of time with us.