Car hire at Seville airport could not get easier than pre-booking with Carhirespain.net. Arrange your car hire before you fly and save up to 50 per cent over hiring a car after arriving. Car hire at Seville Airport is what we do well.

With Carhirspain.net you can choose any type of hire car for your Spanish holiday. Our modern fleet includes everything from economy cars to full-sized and luxury sedans. If you are travelling in a group or simply want more space, we have a full selection of SUVs and seven-seater vans.

You can collect all of our hire cars directly from the Airport. In most cases, the daily rental fees cost little more than an airport transfer and a few taxi rides.

Whatever your Spanish holiday plans, Carhirespain.net has the right car for you. We can make your time in the capital of Andalusia both memorable and affordable. 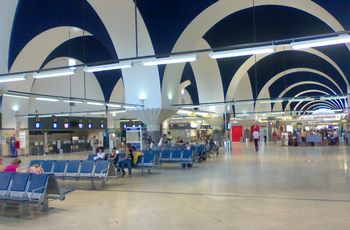 Seville Airport has an excellent selection of car hire providers located in the arrivals terminal. After landing, you will find rental desks for Thrifty, Enterprise, Hertz, Alamo, Avis, Budget, Goldcar, National, Firefly and also Sixt. All are within easy reach after you collect your luggage.

You will find the car hire desks located to your right, just past the tourist and hotel information desks. They are also outside the baggage claim.

Collecting your hire car at Seville airport is a simple matter of finding the right desk, checking in and collecting your keys. After you check in, exit the terminal and cross the road to P1 parking, where the car hire agencies park the cars. The hire cars are kept directly across from the Arrivals Hall exit doors near the rental desks, so you do not have far to go.

To locate your car, check the columns in the parking bay, each column is labelled with a hire car suppliers name. Once you have found your supplier, proceed to the correct bay and locate your car by plate number. Your holiday in Seville has begun!

If your supplier is not on-site, they will likely have a free shuttle prepared for you. To be certain, check your booking voucher for details. Most free shuttles depart from directly outside the Arrivals Hall.

Returning your hire car at Seville Airport is a relatively straight forward process, Look for the signs that say “Llegadas”, or Arrivals, and also Rent a Car in English. These will direct you to the drop-off area within the P1 parking Terminal.

Please note that while hire car returns are in the P1 terminal, they have their own entrance, so look for the sign that says Rent a Car rather than pulling into the entrance marked P1. There are five barriers where you need to take a ticket to enter — only one is marked with rental car brands.

Once you have passed the barrier and collected your ticket, follow the signs to the parking bay for your rental supplier. The correct bay displays your supplier’s logo. Once you are there, park and lock the car, and give your ticket stub to the waiting attendant. If there is no attendant, you will need to drop off your keys and ticket stub in the Arrivals Hall.

Seville Airport (SVQ, LEZL) serves western Andalusia in the south of Spain. It is also known as San Pablo Airport to differentiate it from the nearby Tablada Airport which served the military until 1990.

Seville airport served 7,544,473 passengers in 2019 and has undergone consistent updates since 1991. Its current renovation is expected to be completed by 2021 and will increase its capacity to 10,000,000 annually.  The airport also serves as a base or focus airport for international low coast carriers Ryanair and also Vueling.

Airlines and Routes at Seville airport

The First level is the Departures Level.

Sevilla Airport has all the major facilities you would expect from an airport serving over 7 million passengers per year. It also reflects the Culture of Seville throughout its different areas with high vaulted ceilings, brilliant arches and contrasting colours. It has three main spaces —  The Palace, The Mosque and The Orange Trees.

The airport was designed by architect Rafael Moneo. Construction completed in 1992. There are abundant retail space and also food and beverage concessions, as well as an interfaith chapel and VIP lounge.