For a hassle-free transition from the arrival hall in Tenerife North Airport to your rental car, let Carhireinspain.net do your research for you. Our search engines give you the information you need to make the best car rental decision for your Spanish holiday. We will make your car hire at  Tenerife North Airport easier and cheaper.

We help you choose the services and features that matter most to you. Whether you need an additional driver or are looking for unlimited mileage, Carhirespain.net finds you the perfect policy. We find you the right car hire, whether you plan on climbing Mount Tiede or sipping drinks in Santa Cruz.

Compare the major car rental services for car hire at Tenerife North Airport and you will be on the road to Carnaval in record time.

A number of major car rental companies maintain desks at Tenerife North Airport. The main rental car suppliers here include  Cicar, Avis, Hertz, Auto Reisen, Europcar and Goldcar. You can easily find them all at the car hire desks inside the terminal building.

To collect your car hire at Tenerife North Airport, just head out of the baggage claim area and into the arrivals hall. Once you locate the representative for your car rental company they will point you to your vehicle after check in.

For pickup, hire cars are generally located in the car park nearby. Keep an eye out for signs that will tell you what level your rental car supplier is located on.

Because it is one of two airports on Tenerife, car pickup procedures vary from company to company. The airport at Tenerife North is quite small in comparison to Tenerife South Airport. Because it is a single, smaller terminal, finding your way around is simple. It is also easy to find someone who can direct you if you need it.

Dropping off your car hire at Tenerife North airport

When picking up your car hire at Tenerife North Airport you’ll  receive instructions on where to drop it off. You generally drop-off  your car where you picked it up unless you arrange otherwise.

Because of Tenerife has two airports, it is common for you to pick up at one airport and drop off at another.  If you fly out of Tenerife South Airport, make sure a drop off at a different location has been pre-arranged.

Booking early and pre-arranging a different drop-off location helps you avoid unwanted extra charges at the end of your holiday in Spain. For this reason, it is always best to pre-arrange your car hire at Tenerife North Airport. 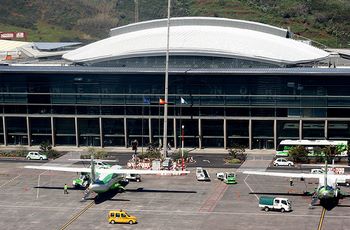 Formerly known as the Los Rodeos, Tenerife North Airport (TFN, GCXO), is one of the two airports serving Tenerife. It is located near the northeast coast. Tenerife North is smaller than its sister airport Tenerife South. It  primarily hosts domestic routes with the odd international charter.

Tenerife North was the first airport built on Tenerife. It began as an airstrip in 1930. It linked the Canary Islands and the Spanish Mainland by air. It wasn’t until 1939 that a proper hangar was built, and 1946 that enough infrastructure was in place for international traffic.

Although its international routes are limited, flights to Agadir, Marrakesh, Caracas, Lisbon, and Sofia are available through smaller regional carriers, mostly on a seasonal basis.

Many of Tenerife North’s flights are seasonal, so be sure to confirm that your route is active if you plan to travel off-season.

The new passenger terminal building has 47 check-in counters serving 16 boarding gates. 10 of the check-in desks and 6 of the boarding gates are dedicated to inter-island flights.

Arriving passengers enter Tenerife North Airport from the mezzanine level, via one of the six air-bridges, and move down to the ground floor level and the six baggage carousels. Car hire desks are located in the Arrivals Hall, lower level.

While it is small, Tenerife-North Airport has a variety of bars, cafés, and restaurants. Free WiFi is available throughout the terminal. There are also currency exchange counters, ATMs, a pharmacy and duty-free shops.

All modern airport services can be found here, including post-office, medical aid, lost baggage services and a lost and found. There are is also an interfaith chapel.

The terminal building is also fully accessible for disabled passengers.