Problem-free affordable car rental is what Carhireinspain.net is all about. To head straight from your flight to your holiday letting overlooking Los Gigantes, book your car rental now. Our rental search engines provide you with all the information required to make the right car hire choices for your Spanish vacation.

We compare all the car rental agencies available at Tenerife South Airport. Try our car search and choose a rental car with the policies and prices that work for you. Our pre-booked rental cars are all picked up are in- terminal for most makes and car models. This includes compact cars, mid-sized sedans SUVs and even luxury cars.

With two airports serving Tenerife, it is important to confirm you have the right drop-off policy. Pre-select a one-way policy if you are flying into one of Tenerife’s airports and out of the other. This can often be arranged at no additional cost if you book early with Carhirespain.net.

Facts about hiring a car from Tenerife – South airport

Tenerife – South Airport has a great selection of major car rental agencies both international and local.  From the main terminal, passengers have easy access to Auto Reisen, GoldCar, Interrent, Hertz, Cicar, Sixt, Europcar and TopCar.  Most car rental desks are in the Arrivals Hall on Floor 1.Some however, like TopCar, are on Floor 0.

After collecting your baggage,  first check your voucher to confirm the Level your car hire desk is located on. While most agencies are on Floor 1 there are a few on.  Floor 0. It should be clearly indicated in your car hire documents.  Next, Once you have checked in, head over to the car park to collect your car.

The airport is quite clearly marked with signs that will direct you to the right floor for your car hire supplier company.

Dropping off your rental car.

Your car rental Agency at Tenerife-South should give you clear instructions on where to return your car. Generally, you would agree to drop it off at the same spot you picked it up. Because Tenerife and its two airports are fairly unique, the car rental companies are occasionally willing to make alternate arrangements.

Many travellers fly into one of Tenerife’s airports and fly out of the other. If you flew into Tenerife – South, and want to fly out of Tenerife – North Airport, please make sure your one-way drop off has been per arranged so you can avoid extra charges. 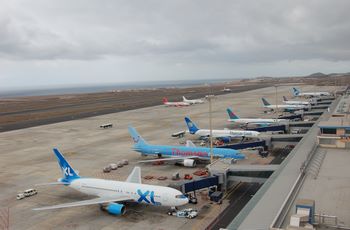 Tenerife – South, also known as Reina Sofia Airport (TFS, GCTS) is one of the two airports on Tenerife. Located in the south, it is the larger of the two and handles both International and Domestic traffic from mainland Spain.

The airport officially opened in 1978 by its namesake, Queen Sofia of Spain. In its first year, it served over 1,000,000 passengers, very effectively lightening the load on its nearby sister airport.

As a result of the limited domestic routes, the majority of its 11,168,506 (2019) passengers per year are international travellers. The most popular routes are to  Manchester, London, East Midlands, Düsseldorf, Brussels and Amsterdam.

Over 60 airlines fly into Tenerife-South every year. British Airways, Alitalia, easyJet, Ryanair, Jet2 and TUI are the international carriers that have some of the most extensive flight schedules.

Like Tenerife – North, Tenerife-South is a single-terminal airport on three levels.  It is known for its red brick façade. It is the newer of the two airports on Tenerife, and, due to its location in the South has a more stable climate. This is because Tenerife – North is more prone to fog and poor weather.

With a bit of an unorthodox layout, Tenerife south dedicates its Ground Level to both passenger arrivals and check-in for departing flights. Once you have checked in for your flight, you move up to Level 1 where the Departures and commercial services are located. The top level, Level 2 contains airport offices and transit corridors.

The departures area has 34 boarding gates and 8 sky bridges to serve all flights.

Tenerife South has extensive facilities airside in the departing passenger areas. While awaiting your flight you relax at an Irish pub, eat Japanese food or enjoy a beer or some wine with tapas.

There are also a few fast food options available as well as cafes for your espresso fix.  In case you are homesick, there is even an English-style food court to ease your journey back home.

As you would expect of an international airport, currency exchange counters, ATMs, shopping, pharmacies, and duty-free are all close to hand.

Because of its recent upgrade, the terminal building is also fully accessible for disabled passengers.