We offer you a fleet of rental cars in Tenerife that ranges from the convertible of your dreams to practical and affordable compact city cars. Use our rental car search to compare the rates and policy charges of most rental car companies in Tenerife.

Make sure you get the full-full fuel policy you want ahead of time without risk. We offer free cancellation up to 24 hours before pick up time if the plans for your Tenerife holiday change. Book with Carhirespain.net and you will be having dinner in Santa Cruz de Tenerife not long after your flight has landed.

For the most convenient, affordable way to get out of the airport, book with Carhirespain.net before your holiday begins. 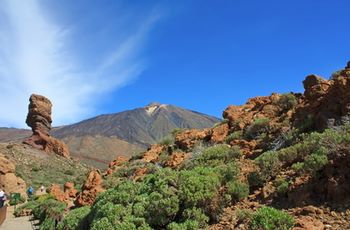 With two international airports, Tenerife is a jumping-off point to the rest of the Canary Islands and mainland Spain. Make your connections to Gran Canaria, Santa Cruz de La Palma, Lanzarote, Fuerteventura, Madrid and Barcelona, with hundreds of flights departing its shores to each destination monthly.

This unique Spanish archipelago is, in some ways, more Moroccon than it is Spanish. It is far enough away from the mainland that it maintains a Berber influence to temper its Spanish roots.

While Carnaval is a seasonal attraction, Tenerife’s natural diversity is a year-round draw. The island is rich with resorts and beaches, their sands ranging from white to black. Los Cristianos and Playa de las Américas are just two examples of what the island has to offer.

Santa Cruz de Tenerife, the island’s capital, lies in the northeast. With a mild climate and plenty of open-air shopping plazas, it is a great place to stroll. If shopping is not your thing, beautiful old parks and avenues, sculptures and historical buildings make for a great day out.

In addition to historical buildings, Santa Cruz has a wealth of Modern Architecture. Check out the Auditorium of Tenerife, or Recinto Ferial, the Trade Fair Park. The Tenerife Espacio de las Artes (The Tenerife Arts and Culture building) is the perfect place to visit after a hot day at the Parque Maritimo.

What to see in Tenerife with a hire car

Tenerife has a one-of-a-kind heritage and a diverse landscape which includes everything from snow-topped mountains to world-class beaches. It is this diversity which makes it the ideal place to just get into your rental car and explore the island.

Take the opportunity to go beyond the crowded resorts and drive past the water park, to a lesser-seen Tenerife. It is well worth the expense of hiring a car to explore the less-travelled spots where you can enjoy a more relaxed approach to Canarian life.

Tenerife’s southern beaches, like the world-famous Los Cristianos, may be popular with holiday tourists, but when the locals want to hit the beach they drive up north. Take advantage of your hire to get close to some of the most remote beaches on the island. Some are so remote you can only drive so far before you need to park up and hike or boat in.

Playa de Antequera may actually be the best beach on the island, but it isn’t easy to get to. It requires either a boat hire or a 2.5-hour hike. However, you chose to get there, head your car north towards Igueste de San Andrés. From there you can make your arrangements to visit this unspoiled paradise of dark sand, rock formations and caves.

If the hike doesn’t do it for you, point the hire car to Playa de las Gaviotas or Playa de Benijo. You will find more people around because they are accessible by car and have a shorter walk, but the volcanic rock formations make it worth the effort. The fact that they are clothing optional is just a bonus.

Mount Teide cant be called a secret spot, it is Spain’s highest mountain and the world’s third tallest volcano. It reaches a height of around 12,220 feet (3,720 m). If it hadn’t erupted millions of years ago, Tenerife would likely not exist today. To get to the top you can take a cable car, or you can take the less-travelled route and head up on foot.

If you decide to walk, be forewarned, it takes around 5 hours to get to La Rambleta where the cable car stops at 11,665 ft, that’s 3,554 m, above the crowded beaches. 500 feet shy of the top Mt Teide is a rest area. Here, public washrooms and wifi are available.

You need a permit to trek up to the crater summit – so plan ahead. It is a difficult hour there and back, but the reward is worth it – the highest point in Spain.

If you don’t feel like walking all the way to the peak, the Parque Nacional del Teide offers other walks through this dusty moonscape, check for the parking areas off the TF-21. You can’t miss it, it’s the only road at the base of the peak.

Punta de Teno sits in Tenerife’s northwest, it is a small point that cuts into the Atlantic Ocean. You cant get more to the west on the island, and, from its tip, it gives you an excellent vantage point to see the rocky coastline. In 2017, the Canarian government restricted access to the point to preserve the fragile ecosystem.

While you can’t actually drive your hire car straight up to the protected point, it is perfect for a short bicycling adventure. While you are there, check out the Teno Lighthouse, with and its amazing views of Tenerife’s western cliffs.

Once you have looked upon Los Gigantes from above, explore the caves along Ballenita Beach. You can also take a swim, the water is accessible in a few places

If you have always wanted to visit Machu Pichu but simply haven’t been able to make it, the mountain village of Masca is a place you must see. The town sits beside a huge mound, just like the Incan city.

While you could just take a leisurely walk along Masca’s main strip and enjoy the cafés and souvenir stores, you would be missing out. Just beyond town and the ravine is Masca Bay, the Atlantic beats against the feet of the Los Gigantes cliffs.

A boat is the only way to get up close to this lonely coastline, and the best way to do that is by kayak. You can arrange a kayak tour in Santiago del Teide. There are plenty of places there to park your rental car.

What type of car is best for a holiday in Tenerife?

When you decide on a car to rent in Tenerife, consider the maximum number of passengers you will carry. It is also important to decide if you will carry your luggage or sports equipment around. You should also consider the distance you plan to drive.

If you plan to make only short trips or stay in town, a compact may suit you. If your plans include 4 friends and Golf clubs, you may consider renting an SUV. If it is just 2 of you but you intend to take longer day trips and want to cover the distance comfortably, renting a mid-sized sedan will probably best meet your needs.

Can I rent a car in Tenerife with my temporary driving license?

How old do I need to be to rent a car in Tenerife?

To rent a car in Tenerife you need to be at least 21 years of age,  but some car rental agencies have raised the age restriction to 23.

If you are under 25 years of age, some additional charges may apply. In some cases, you may have to satisfy an additional insurance requirement.

Can I pick up my car at one airport in Tenerife and drop it off at the other?

You can pick your car up at one airport in Tenerife and drop it off at another. It is, however, important to arrange the drop off in advance with the rental agency, or, if possible when booking your car hire online as additional charges may apply.