Hiring a car for your holiday in Fuerteventura can be a daunting task, but it doesn’t need to be.  With Carhirespain.net we give you the tools to make sure you find the best value car hire for your needs. Benefit from our expertise in car hire at Fuerteventura Airport.

Try our car hire search and compare the rates of all the major car hire suppliers online — before you commit. You can search for the car rental policies that work best for you. If you want an airport pick up or also an additional driver to share the responsibility, we can help you make it happen.

Compare rates and Policies with Carhirespain.net now, and enjoy your savings in Corralejo with a drink in your hand and the sun on your face.

Facts about hiring a car from Fuerteventura airport

When it comes to hiring a car at Fuerteventura Airport, you are spoiled for choice. There are eight major car hire suppliers with rental desks at the airport, and these are in the main Arrivals Hall.

Picking up your hire car

It is a simple task to pick up your hire car at Fuerteventura Airport. The major car hire suppliers all have desks near the baggage claim in the Arrivals Hall.

Once you have grabbed your luggage, it is just a matter of checking your voucher, finding the correct car hire desk, and collecting your keys after check-in.

All the hire cars are in the nearby parking garage. Your agent will direct to the correct location. The rental car parking section is also clearly marked, and you should have no difficulty finding it.

Returning your hire car at Fuerteventura is an equally simple task.

When driving into the airport, clear signs will direct you to the area in the car park where you return your hire car. Follow the signs to your car hire supplier and simply hand over the keys to the awaiting attendant.

Also be sure to have them sign off, and check the car for all of your possessions before following the directions to your departure area. 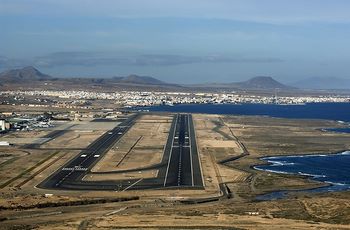 Fuerteventura Airport, also known as Matorral Airport ( FUE, GCFV) is in El Matorral around five kilometres to the southwest of the island’s capital, Puerto del Rosario.

Located on the second largest of the Canary Islands, Fuerteventura serves over 80 destinations in Spain and internationally. It also processed 6,118,893 passengers in 2018, although traffic dropped to 5,187,319 in 2019.

The airport is a gateway to the Canary Islands. While it is not as busy as its sister Island Tenerife, it offers connections to Gran Canaria, Tenerife, and La Palma.

The terminal opened in 1969 as one of the three stops in an inter-Canary Island shuttle. As traffic increased, the airport expanded in 1973 and 1978.

A new terminal building began construction in 1994. At that time the apron and runways were also extended. The final renovation was the new car park.

Fuerteventura is a typical single terminal airport, like most in the Canary Islands. The terminal has two levels.

Level 1 is dedicated both to Arrivals and Departures and houses the passenger check-in areas.

Level 2 is dedicated entirely to Departures and holds all the Fuerteventura Airports boarding gates.

Fuerteventura is actually a very pleasant place for an international airport. It has some excellent food services and features both bars and restaurants airside and in the dedicated passenger areas. The highlight is Paradise Terrace, a lovely outdoor space in the passenger only zone where you can enjoy a drink while waiting for your flight.

In addition to many food and drink concessions, duty-free shopping and many retail outlets round out the typical airport services.

The building has medical services a post office and special assistance can be arranged for passengers who require it.

There is also an interfaith chapel and a delicatessen specialising in Spanish gourmet specialities.