Carhirespain.net offers you a world-class rental car search service that could save you up to 50 per cent on your car hire in Seville. As you plan your Spanish holiday, compare rates between top car hire agencies to find the best car rental rate for you. We have endless experience with car hire in Seville.

Search and filter for an unlimited mileage or full-to-full fuel policy, add an additional driver or arrange a hassle-free airport pick up, all from home. Our free cancellation policy allows you to change your plans penalty-free up to 24 hours before your scheduled pickup time.

Pre-book your car hire in Seville with Carhirespain.net and spend your savings on the Plaza España in the heart of Seville’s old town. 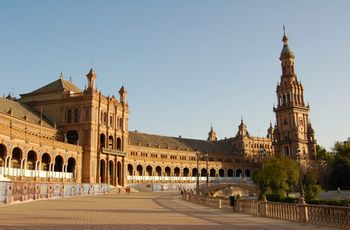 Seville, the capital of Andalusia, has something for everyone. It has Moorish monuments, catholic architecture and one of the oldest bullrings in Spain. As a result, Seville is rich in Spanish history and Andalusian culture. It is the perfect place to get lost in the past while enjoying the modern comforts of Spain’s 4th largest city.

The city’s wealth of history impresses you around every corner. Evidence of Seville’s past as a Morrish Capital and, later, its position new-world 16th-century trade confronts you with every step. In the four sq km old town, there are three UNESCO World Heritage Sites. Not that this is surprising for a city over 2,200 years old.

Mudejar palaces, medieval lanes, baroque churches, aristocratic mansions and a Gothic cathedral all co-exist in modern Sevilla. The city is known for its annual festivals the Semana Santa and Feria de Abril. This ancient city was founded by the Romans earlier than the year 711 and the Muslim conquest.

Seville has always been about looking outward, Ferdinand Magellan began his trip around the world in Seville. Likewise, the New World wealth discovered by Christopher Columbus was brought to Seville. This is because it was Spain’s best defended port due to its location inland on the river  Guadalquivir.

Because it is in the centre of Andalusia, Jerez Cadiz, Cordoba, Granada Alimera and Gibraltar are all a few hours away. As a result of its central location, Seville was the distribution point for Spain’s colonial wealth.

If you prefer to live more in the moment, Seville’s nightlife and food scene is famed across the world. Check out areas like the Alameda De Hercules with its many clubs and bars if you want to dance until 7 am. If you are more about food, Alfalfa or Paseo de Cristobal Colon may be for you.

Be warned, Seville is a very young at heart party town with it many universities. If you are getting on a bit, you may find it tough to keep up with this young and beautiful crowd.

What to see in Seville with a hire car

Once you have settled into your hotel, Seville has so many sights and experiences to offer you. Here are some of the best local attractions to visit in your Hire car in Seville.

No trip to Seville would be complete without a stop to visit the Royal Alcázar Palace. Construction of a Moorish fortress by the Umayyads began as early as the tenth century. But this was not the earliest activity on the site, Seville was built off of the existing Roman walls.

The original fortress was replaced by the first royal palace, belonging to Almohad Dynasty in the 12th century.

Further additions and embellishments continued through the 19th century. As a result, structure mixes and blends Moorish, Renaissance and Mudéjar architecture. To this day the topmost levels of the Alcázar serve as the local residence of the Spanish Royals. It is a truly astonishing building and a living testament to the perseverance of Andalusia.

An Alcazar full of art

Over 500 paintings and other priceless valuables were lost in a Christmas Eve fire in 1734.  Despite this tragedy, the Alcazar contains centuries worth of artefacts, art and royal treasure in its collections.

To visit this imposing structure that dominates the city is key to understanding the development of Seville and Spain herself.

Its Lush gardens and Moorish pools, intricate arches and delicate column should not be missed.

Having visited the ancient Real Alcazar de Seville, take in the Casa de Pilatos. Here you finally understand the wealth and prosperity that defined Seville  in the 15th and 16th centuries.

This is a private rather than a Royal home, and it  is one of Seville’s hidden secrets. The Casa de Pilatos has exquisite gardens and architecture to rival the Alcazar but on a much more intimate scale.

Built by a wealthy conquistador and Mayor of Andalucia, construction began in the late 1400s. The casa is a classic Mudéjar home centred around a traditional Andalusian courtyard.

Locals mockingly named it Pilate’s House after the conquistador’s son returned from a Jerusalem trip obsessed with the holy land.

If it seems familiar, it is also the palace in the film classic Lawrence of Arabia.

Mudejar architecture defines Seville in many ways, and there is no example as as recent as the Plaza de Espania.

Constructed in 1928, the Plaza was built as a very intricate tribute to Sevilles Mudejar past. I was intended for the Ibero-American Exposition of 1929. The Plaza, in the shape of a half-moon, also features a moat with a fountain at its heart. As a result it combines Mudejar and renaissance influences with art deco flourishes of the time.

You can rent a small boat and scull the moat. It has four bridges, one for each of the ancient Spanish kingdoms.

Whatever your feelings are on the sport of bullfighting, it is an integral part of both the history of Spain and Seville. Seville’s Real Maestranza bullring a building filled with both cultural and architectural significance. It is one of the most beautiful and important bullfighting plazas in Spain.

Construction on Real Maestranza began in 1761. It replaced the city’s old rectangular bullring, the Plaza de Toros, and took over 100 years before its completion in 1881. The  Prince’s Gate (the main entrance), with its black iron gates by Pedro Roldan began its life in a nearby convent. Matadors consider it a mark of honour to be carried through them by their peers.

The Maestranza’s is an excellent museum that documents the history of bullfighting as well as keeping detailed records of both the genealogy of the bulls and matadors that have graced its sands.

Day trips from Seville with a hire car

Due to its location as the centre of Andalusia, Seville is an excellent place to take advantage of your hire car and explore the region and historic towns that surround it. These are some of the places you can get to in a hire car, usually in under two hours.

Cadiz and Seville have been linked for centuries, so much so that it almost seems wrong to visit one without visiting the other. Seville is definitely the grande dame of the two cities. As Seville’s influence as the leading Spanish inland port began to fail, Cadiz was ready to take her place.

Cadiz is 121 km to the south of Seville as the crow flies, and you can get there in an hour and twenty minutes along the AP-4 in your hire car.

Where Seville is an inland port, Cadiz is pure seaside Mediterranean charm. Warm mild weather, clean ocean air, and the sound of seagulls and church bells give Cadiz her charm.

Cadiz is a grouping of atmospherically rich old barrios.  El Pópulo is old stone streets and cramped alleyways. La Viña is a seaside fisherman’s barrio. It is a great place stop for a fresh, delicious and inexpensive meal. Finally, Santa Maria, the gypsy quarter, hums with sounds of flamenco.

Check out the Playa de Caleta if the beach is your thing, If its not, visit the Castle of San Sebastian. The Parque Genovés is an ideal place to spend an afternoon if you would prefer something less sandy. Designed by Valencian Architect Gerónimo Genovés i Puig, the Parque Genovés,  is an enchanted waterfront garden with centuries of history and mysteries around every corner.

Whatever your preferences are Cadiz and the Costa de la Luz could keep you occupied for weeks at a time.

If Cadiz isn’t enough to catch your attention, stop in Jerez de la Frontera along the way.  Jerez provides yet another perspective on the Andalusian horse, Flamenco and sherry cultures.

Cordoba, like Seville, is another one of those cities that come to mind when people talk about the real Spain. It has plenty of history, magnificent architecture and a beautiful old town rich in heritage. Cordoba’s multicultural past unfolds as you wander its narrow streets, elegant plazas, and beautiful monuments.

While you are there check out the UNESCO World Heritage site La Mezquita, the awe-inspiring 8th-century Muslim mosque that is one most beautiful Islamic buildings in the Western world.

Cordoba is a smaller city, especially compared with Seville. It is an excellent time out for those who just want to relax and soak up its charm. It is one of the most romantic cities in Spain, wander the Jewish quarter while admiring the flower-filled balconies and patios. You can get lost amongst its secludes alleyways and delightful old houses.

Every May, the courtyards and patios of houses in Cordoba’s old quarter open to the public for the Feria de los Patios. The locals compete for the honour of the prettiest space, and the normally private gardens are breathtaking after a full year of planning and preparation. The garden owners are usually on hand to discuss how they created these oases of colour.

You can reach Cordoba in your hire car in an hour and forty minutes. Take the A-4 Northwest out of town (and out of Andalusia) to the Capital of Cordoba province just 140km away.

Ronda is unlike any other town in Andalusia and is an hour and forty minutes out of Seville in your hire car. It is in the southwest towards Malaga and Marbella. It is also one of the top 3 most visited destinations in the south of Spain.

Ronda is one of the famous Pueblos Blancos (White Villages) — it is a clifftop village in one of the most dramatic landscapes in Andalusia. Ronda sits atop a plateau split in half by the  El Tajo gorge. The famous Puente Nuevo bridge which straddles the 130-meter tall ravine joins the town.

While you are there stop to take in the Casa del Rey Moro gardens and the Alameda de José Antonio park.

Granada is the farthest of our suggested day trips from Seville. It will take 2 hours and forty minutes from the city centre in your hire car, but it is well worth the trip if only to see the iconic Alhambra.

The Capital of old Andalusia

In the 13th through the 15th centuries, Andalucía was the western capital of Islam and home to some of Medieval Europe’s finest cultural achievements. The Alhambra was the heart of that cultural movement. It is a stunning collection of palaces, towers, gardens, walls, and a mosque all covered in delicately carved stonework and also detailed tile work.

There is more to Granada than just the Alhambra though. Take your time to walk through the cities beautiful gardens and flower-laden narrow streets. you can also sample the regions “Trevélez” ham and local wine. Granada is so rich in history, you can feel the weight of the centuries around you.

Once you finsh in town, visit the “Cuevas,” or caves, in the mountain of the artisanal monastery of Sacromonte.

If you time your trip right Granada’s popular festivals, based as well on Moorish as Christian traditions, are like none other in Spain. It is well worth the drive.