Enjoy the freedom to see Madrid your way — in a hire car from Carhirespain.net. Pre-book your car hire online before you fly and save up to 50 per cent over booking in person. We have years of experience with Car hire in Madrid.

Avoid the inconvenience of taking an airport shuttle to collect your car by arranging an airport pick up. We allow you to compare car rental policies and custom tailor a car hire that meets your needs.

Step off the plane and into your hire car – you will be relaxing in the Plaza Mayor with a Sangria in no time.

Let us help you plan the perfect Spanish holiday. 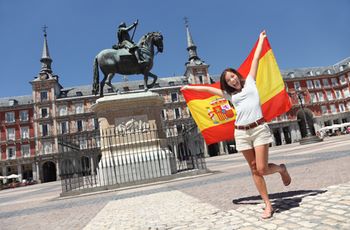 Madrid, Spain’s capital city, is a thriving metropolis of 6,642 million souls. It is located in the middle of the country on the River Manzanares. Its central location makes it an ideal place to hire a car and explore nearby Segovia, Toledo, Cordoba, Salamanca, Avila or even Barcelona if you are up for a bit of a drive.

Marid is a town with a rich artistic history. Many art lovers visit it annually just to soak in its rich culture and never exhaust all it has to offer. Because Madrid was The capital of Spain for centuries, the Spanish royal families commissioned art and cultivated the finest artists in Spain there.

Spanish artists like Goya and Velázquez spent most of their careers painting in Madrid. If you prefer modern Spanish painters like Picasso, Dalí and Miró, their works are also hanging in many of the cities’ many museums and galleries.

At the very least you need to visit the big three — the Museo del Prado, Centro de Arte Reina Sofía and also the Museo Thyssen-Bornemisza. But don’t limit yourself — Madrid has many more cultural sites to entertain you.

If food is more your thing, Madrid has options far beyond basic local delights. It is one of the most diverse food cities in Europe. Madrid is a showcase of Spanish Culinary art, where the new joins with tradition. You will find an endless selection of food from all regions of Spain here. From the modern to the ancient, Madrid has it all.

There is also no shortage of 5-star international cuisine.

Nothing beats the Spanish nightlife and Madrid does it better than most cities in Spain. Its nightlife is worthy of legend. With a collection of bars, pubs and also clubs that can rival any city in the world, Madrid has you covered. Also feel like a casual cocktail or a night in a club? Your choices in Madrid are never-ending.

But it is not just about the sheer amount of choice you have. Madrid also has a vibrant night-time atmosphere that will carry you out into the night no matter where you choose to start.

While Madrid may not rival Paris or Rome for iconic monuments, it is certainly not lacking in architecture. Madrid’s history as the home of Spanish royalty means the city is a mix of the ancient, medieval and also contemporary. Madrid showcases everything from Spanish baroque to the belle epoque. It is a beautiful city with so much to take in.

What to see in Madrid with a hire car

There are so many things to see in and around Madrid that it is hard to know where to start. Here are a few of Madrid’s more unusual surprises. Most of them are in and around the city, perfect for crossing off your bucket list while touring the city on your hire car.

The Temple of Debod is an ancient Egyptian temple near the Plaza de España, the heart of Madrid.

Given to Spain by Egypt in 1968.  The site offers thanks for Spanish efforts in saving archaeological sites that would have been lost when the Aswan High Dam flooded. The temple, dated from the fourth century BC honours the Egyptian gods Isis and Amun. It was originally located in the Nile Basin.

The temple is surrounded by a pool that reflects its image. It is also on a hilltop offering panoramic views of Madrid. The pool and temple are magnificent at sunset.

At night, it is a popular place for Madrid’s younger crowd to hang out drinking in preparation for a night out. By day its surrounded by tourists and noisy Argentine parakeets.

Go later in the day so you can enjoy the transition from tourist attraction to vibrant nightspot.

One of the original eight stations on the 4 km long Madrid’s Metro Line 1, Estación de Chamberí is also a window into Madrid’s past.

Opened in 1919, during the Spanish Civil War, the station provided shelter from the bombing and artillery of the Nationalist forces and Nazi allies.

Because it was built on a curve and close to both Bilbao and Iglesia stations, Chamberí was closed in 1966 after the new extended trains proved too long for its platform.

Inside you will find painstakingly reconstructed, bright coloured, tiled Mosaic ads lining the walls of the platform. They appear just as they looked in 1919. While you are visiting you will also see the trains that still pass through this odd museum from behind a glass barrier.

Although most people are familiar with Riccardo Bellver’s “Fallen Angel” depicting the fall of Lucifer from Grace, less know about sculptor Miguel Ángel Ruiz Beato’s “Air Crash”.  Air Crash offers a different take on the fall — this Angel is falling from the sky at a very undignified angle.

The bronze angel appeared in place in January 2005. There there is some speculation as to whether the drunken angel is Lucifer, Icarus, or perhaps the angel from Led Zeppelin’s Swan Song record label.

Either way, why not hop in the car hire and take in both for a different perspective?

Day trips from Madrid with a hire car

Hiring a car is the ideal way to get out of the city and explore the territory surrounding Spain’s long-established capital city.

Here are a few destinations that you can take in within an hour or two of town.

Aranjuez is a UNESCO World Heritage site About 47 kilometres south of Madrid. It is a perfect trip with friends or family in your hire car.

Built during Ferdinand VI’s reign in the 16th century, the Palace of was the royal summer residence. It is famous for his court’s Baroque and Rococo palaces laid out along the Tagus River with geometric precision. It is well worth the trip to take in its gorgeous avenues, central squares, and rich gardens. Aranjuez is a prime example of the architecture of the Enlightenment.

Initially built for  Philip II in 1560, Royal Palace was refurbished in the 1660s. Although predominantly in the Renaissance style, the palace facade features Spanish Baroque influences.

The decor inside the palace is lush and filled with art objects, fine porcelains, tapestries and paintings of the period. An exceptional staircase, Sabatini’s Chapel Royal, and the velvet throne room are highlights you should not miss.

If History fascinates you, here is another UNESCO World Heritage Site that is in perfect striking distance of Madrid for anyone with a hire car. Point your self 72 kilometres towards Toledo, and you should arrive within an hour if traffic is kind.

Resident artist  El Greco painted Toledo in the 1500s, and it really hasn’t changed much since.  Toledo was home to a healthy mix  Islamic, Jewish, and Christian residents and its medieval walls, and narrow stone streets take you back to those early days. The town has an abundance of beautiful historical churches, convents, synagogues, mosques to remind you of its multi-cultural history.

After parking the rental car, a tour through the city’s old streets to see the Church of St. Tomé, the Synagogue of Santa Maria la Blanca, and the Monastery of San Juan de los Reyes.

You can take a formal guided tour of just meander from place to place on your own.

Madrid to Segovia is an hour to an hour and a half in your hire car.

A hillside town, Segovia, offers breathtaking views of the Castilian countryside that surrounds it. You should not miss the chance to see it all from the Alcazar.

Perhaps the most striking of Segovia’s many iconic features is its Roman Aqueduct built in 50 AD. It is one of the two largest long-standing examples of Roman architecture and engineering in Spain. It is a remarkable example of Roman ingenuity — not only was it built using 167 arches, but all those arches remain intact today.

As if Segovia’s Roman pedigree weren’t enough, there is plenty more history in the Old Town. Check out the Juderia — its synagogues were converted to Christian Churches after the Reconquista. You can also visit its Romanesque churches, the defensive walls that encircle the city, or its traditional metal workshops.

If you want to double up and maximise your sightseeing, you can easily visit  Avila in your hire car on the same day.

Alcalá de Henares is bout 35 kilometres from the Madrid, so it is a shorter trip in the hire car. The town is famous for the Universidad de Alcalá de Henares, which Cardinal Jiménez de Cisneros founded in 1498.

The university has many impressive buildings, but the Colegio de San Ildefonso (Plaza de San Diego) is its best example of Spanish Renaissance architecture. A Plateresque facade that dates back to 1543 dominates the building.

The town also features a 16th-century Magisterial-Cathedral. It is one of two Magisterial churches in the world. Considered an iconic Gothic monument, its counterpart is Saint Peter’s in Belgium.

Once you are done there, visit the Calle Mayor. Lined with many little boutiques, restaurants, cafés, and shops, it is the perfect place to recharge before visiting Cervante’s Museum.

Will I pick-up my car rental at the airport in Madrid?

Most car rental suppliers in Madrid have Airport pickup and drop-off. Make sure you filter your Carhirespain.net rental search by “Airport pick up” and confirm the information on your voucher. If you didn’t specify Airport pick up at the time of booking, you will be directed to a shuttle to car rental office nearby.

What type of hire car in Madrid is the best?

When choosing a rental car in Madrid, you need to take in to account your travel requirements.

If you are travelling in a larger group or have plenty of luggage,  also consider hiring an SUV or 7-seater van.

How old do I have to be to rent a hire car in Madrid?

To rent a car in Madrid, you need to be at least 21 years old, although some suppliers have set their minimum age at 23.

Please be aware that most suppliers require extra insurance coverage for main drivers under the age of 25.

What is the maximum age for a hire car in Madrid?

Most car rental suppliers require their main driver to be under the age of 70. If you have a valid drivers license, you should still be able to rent a car up until the time you are 78.

You must check your policy for your particular car suppliers requirements or search for age requirement policies with Carhirespain.net.